SmokeFree Campaign 2016. The spring phase of the current SmokeFree campaign focuses on success in quitting smoking: it encourages smokers to draw up a concrete plan of action for kicking the habit and it aims to activate families and friends increasingly into providing support for people who want to stop smoking. To this end, it draws smokers' attention to effective assistance services such as the SmokeFree Buddy app. The campaign is financed by the Tobacco Prevention Fund. 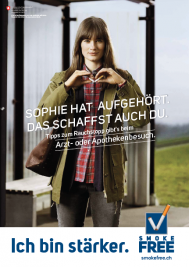 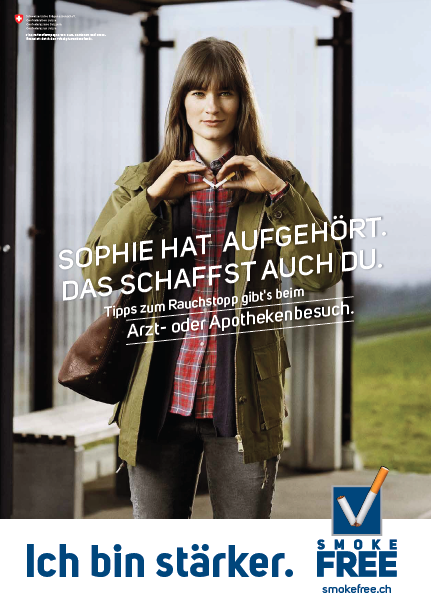 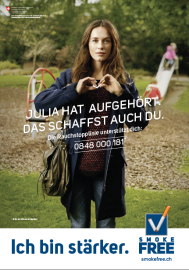 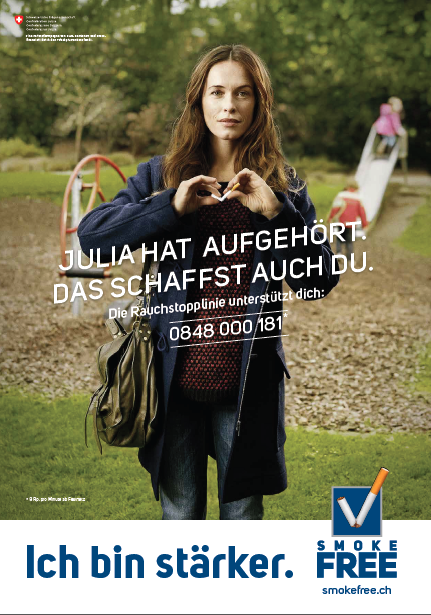 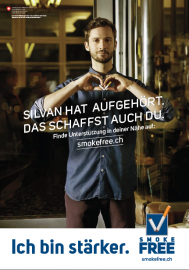 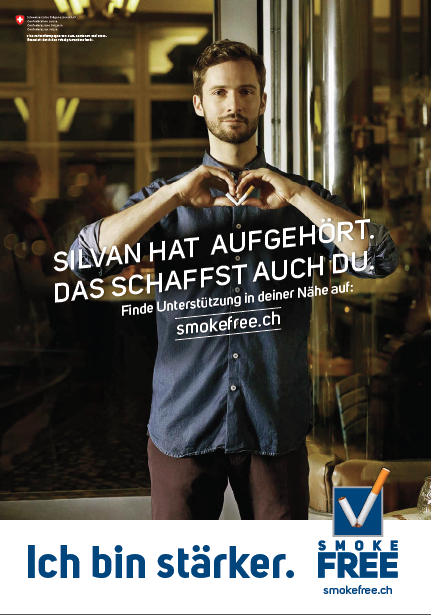 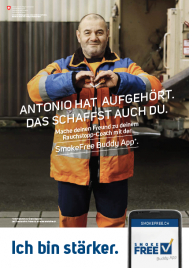 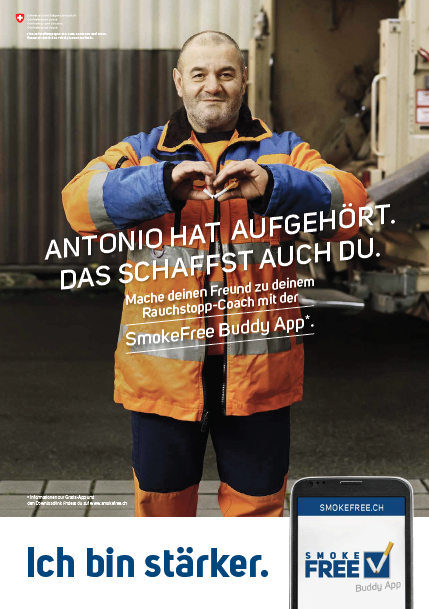 Launched in early 2015 with the slogan "I am stronger", the SmokeFree tobacco prevention campaign supports smokers who try to quit the habit. By way of encouragement, the current campaign runs TV commercials that reminded them of two key facts. Firstly, smoking is the principal cause of lung cancer in Switzerland – 85 percent of cases are due to tobacco abuse. Secondly, it is foolish to deceive yourself into thinking that "this only happens to other people". Experts apply the term "unrealistic optimism" to this phenomenon. Unrealistic optimists underestimate the risks to which smoking exposes them. As a result, they tend to view the message of tobacco prevention campaigns as applying more to other people than to themselves. Conversely, studies have shown that people who consider themselves to be at risk are more likely to appreciate the benefits of giving up the habit.

The initial phase of the campaign was aimed at motivating people to stop smoking. The second, current, phase, which will run until the end of 2016, now focuses on the first step to be taken in the process of stopping smoking. Smokers should set about their switch to a smoke-free life by drawing up a specific plan of action, preferably in writing. Among other things, they should set a date for stopping smoking and list the reasons why they want to give it up. To motivate smokers to take such steps, the new TV commercial features a successful ex-smoker: she is shown bending her cigarette and looking self-confidently into the camera after the cloud around her head that had obscured her from view in the earlier commercials has cleared up.

Include friends and family

Studies show that attempts to quit smoking are more successful when smokers seek professional assistance during the withdrawal phase, for instance the Quit Smoking Helpline 0848 000 181, a physician, pharmacist or professionals working in the field of tobacco control and addiction prevention. An overview of assistance services is provided on an interactive map at www.smokefree.ch/en/assistance-offers. But assistance by friends and family also increases the chances of success. A further key element of the current campaign is therefore the inclusion of would-be non-smokers' social environment, which can provide them with crucial help and motivation in difficult phases. But it is important to realise that approaches involving over-zealous monitoring, intrusiveness or moralising can be contraproductive and may even lead to on-the-sly smoking. Efforts to provide effective assistance should concentrate on strengthening the subject's resources and focusing on positive achievements.

An ideal combination of personal support by a close friend or relative and assistance from smoking-cessation coaching based on scientific insights is provided by the SmokeFree Buddy app. The app was developed as part of the campaign and it supplies tips and specific suggestions for "buddies" (helpers) on ways in which they can support friends trying to quit smoking. When, for instance, ex-smokers use the app to express an acute longing for a cigarette, the buddies can respond by sending text modules formulated by professionals. The texts can also be edited and personal comments added. Moreover, the app can be used by two smokers who want to quit the habit together. The workings of the app are explained in a short film at www.smokefree.ch/buddy-app.

After a marked decline in the early 2000s, the proportion of people smoking in Switzerland has stagnated at around 25 percent since 2008. Smoking continues to be the primary cause of premature death in Switzerland. Every year, around 9,500 people die from the consequences of tobacco consumption. Lung cancer has caused by far the most deaths of any type of cancer over the last 40 years and more. In 2013, it was responsible for the deaths of almost 2,000 men and over 1,200 women in Switzerland (corresponding to 18% of cancer deaths, and 5% of all deaths).